Computer Science and Engineering after +2 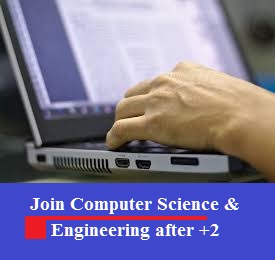 Introduction: Computer Science Engineering involves both computer science and electronics engineering. It includes testing and designing of computer components. There are two types of computer engineers. Computer software engineers and computer hardware engineers. Computers are an integral part of the development of technology. Without computers, humans wouldn’t have reached the technological advancement which thrives today and all the credits go to some of the greatest computer scientists/engineers.

(10+2) with Physics, Maths and chemistry. For IITs, It is mandatory to qualify in the Joint Entrance Examinations (J.E.E). The duration for this course is 4 years.

Disclaimer: These lists are only illustrative and are expected to generate enough curiosity in the visitor to want to inquire/explore further on the scope, possibilities, avenues, etc. for each of these courses and/or for looking for other options/areas that go beyond these courses. It may also be noted that most of these courses are also offered by several private institutions/universities. The reader is expected to further research on this.